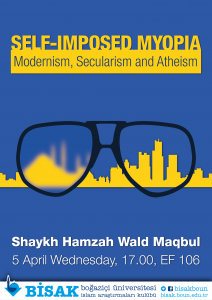 In this conference we will try to take an in-depth look at the meaning of modernity by also clarifying the core concepts of secularism and atheism in relation to the modern world and we will discuss their effects on the religious identity.

See you on Wednesday!

He graduated from the University of Washington completing a Bachelors of Science in Biochemistry and a Bachelors of Arts in Near Eastern Languages and Civilizations. After graduation Shaykh Hamzah went on to pursue traditional Islamic studies, which took him to a number of countries, including Syria and Egypt where he studied the Arabic language, Morocco, Mauritania, and UAE, where he studied the madhab of Imam Malik, grammar, usul al-hadith, and the two renditions of the qira’ah of Imam Nafi’, Warsh and Qalun, and finally Pakistan where he had the opportunity to study tafsir, usul al-hadith, hadith, ‘ilm al-rijal and Hanafi fiqh.

All of these studies culminated in him receiving an ijazat al-tadris, literally meaning “a license to teach” which is the equivalent in Pakistani Islamic seminaries to a MA in Arabic and Islamic studies, as well as an unbroken chain of transmission by which to narrate the hadith of such books as the Muwatta of Imam Malik, the Sihah al-Sittah (Bukhari, Muslim, Abu Dawud, Tirmidhi, Nasa’i and Ibn Majah), and the Sharh Ma’ani al-Athar of Imam al-Tahawi.

After his return to the United States, Shaykh Hamzah spent five years as the resident scholar of the Thawr Institute, a non-profit religious and educational organization based in Seattle, Washington, teaching, giving khutbahs in local masajid, and travelling through America promoting the knowledge and practice of the sunnah. In parallel with his work at Thawr, he was worked closely with Islamic Relief, CAIR Seattle, and a number of other non-profit organizations that serve the Muslim Community.