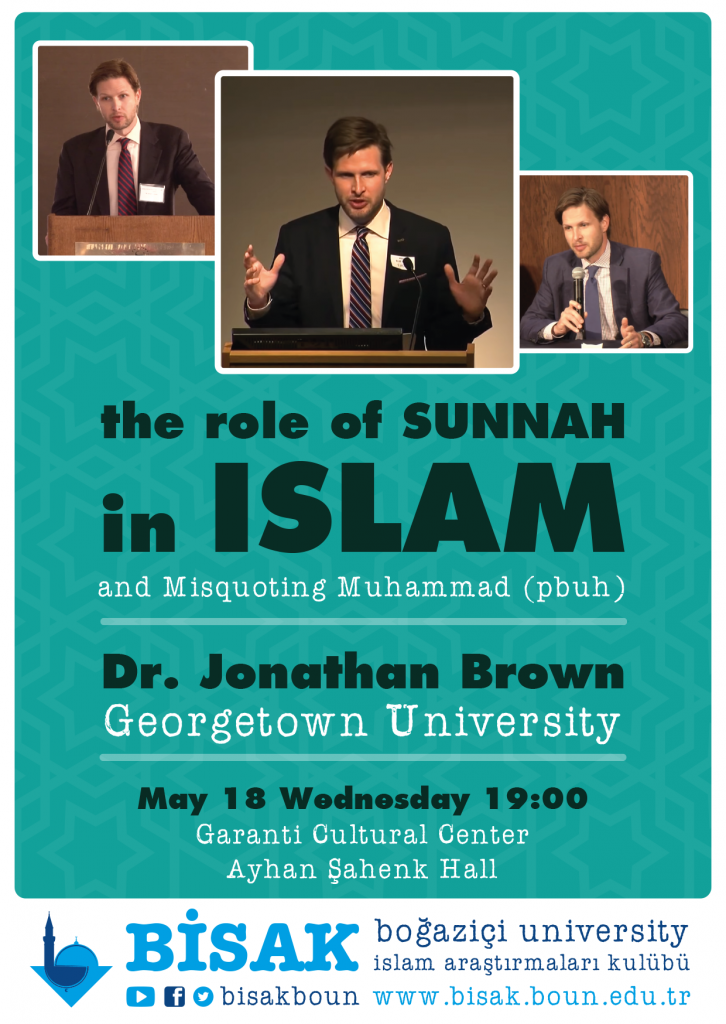 BİSAK cordially invites all interested to the lecture by Dr. Jonathan Brown, “The Role of Sunnah in Islam: Misquoting Muhammad (pbuh)”. Dr. Jonathan Brown’s speech will focus on Islamic intellectual history back in time through Islamic civilization and traces how and why such controversies developed, offering an inside view into how key and controversial aspects of Islam took shape.

From the protests of the Arab Spring to Istanbul at the fall of the Ottoman Empire, and from the ochre red walls of Delhi’s great mosques to the trade routes of Islam’s Indian Ocean world, Misquoting Muhammad (pbuh) lays out how Muslim intellectuals have sought to balance reason and revelation, weigh science and religion, and negotiate the eternal truths of scripture amid shifting values.

The conference will be held on May 18th, Wednesday, 19.00 in Garanti Cultural Center.

Who is Jonathan Brown?

Dr. Jonathan AC Brown, is currently the Associate Professor of Islamic Studies and Muslim Christian Understanding at Georgetown University. He received his BA in History from Georgetown University in 2000 and his PhD in Near Eastern Languages and Civilizations from the University of Chicago in 2006. Dr. Brown has studied and conducted research in Egypt, Syria, Turkey, Morocco, Saudi Arabia, Yemen, Indonesia, India and Iran. His book publications include The Canonization of al-Bukhari and Muslim: The Formation and Function of the Sunni Hadith Canon (Brill, 2007), Hadith: Muhammad’s Legacy in the Medieval and Modern World (Oneworld, 2009), Muhammad: A Very Short Introduction (Oxford University Press, 2011) and Misquoting Muhammad: The Challenges and Choices of Interpreting the Prophet’s Legacy (Oneworld, 2014). He has published numerous articles. He is the editor in chief of the Oxford Encyclopedia of Islamic Law.

Jonathan A.C. Brown The Role of Sunnah in Islam and Dilemmas of Modern Muslims
“It’s a very important point when we think about the past, when we think about history, and when we think about reading texts, when we think about reading things like the Qur’an or the hadith, or anything, when we look into the past, what we’re really seeing is oftentimes more a reflection of ourselves than something about the text or about the past. We always see what our background program wants us to see. This is very important because if you realize this, you realize that often times the problem we encounter when we’re doing things like reading hadiths or when we hear hadiths, occur because we’ve been programmed to think that there are certain universals that everybody agrees on. Like for example, common sense. How many times have you heard someone say “Well that’s just not common sense,” or “this hadith contradicts common sense”? What is common sense? There is actually no such thing as common sense.”

Reviews of The book Misquoting Mohammad